What is Aimec Agricultural Law 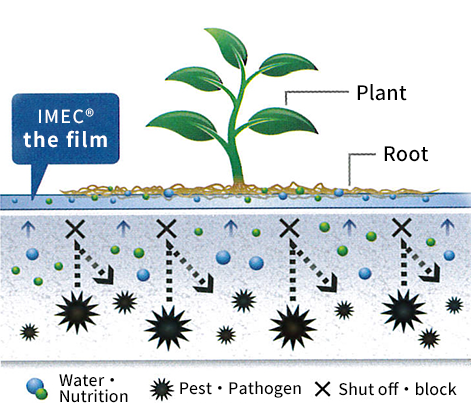 Aimec (film farming) is an agricultural technology developed to address the serious problems faced by the world today in terms of stable food supply and quality, water shortages, soil deterioration and pollution.

IMEC is a technology for growing crops on a special film called a hydrogel film placed on the nutrient solution.

The film has a myriad of nano-sized holes that block bacteria and viruses, which allows crops to be produced even when the nutrient solution is contaminated, greatly reducing the use of pesticides. In addition, Imek can reduce the loss of water and fertilizer to zero.

Aimec is a new agricultural technology that maximizes the original functions of crops.

Mori develops advanced polymer technology cultivated in the medical field in the field of agrochemicals, and the problems of stable food supply and safety caused by water shortages, soil deterioration and pollution that are occurring around the world due to the progress of global warming. In 1995, Mebiol was founded to deal with.

Aimec was introduced to tomato production in 2008. The popular area now exceeds 100,000 tsubo and continues to grow even today. In addition to tomatoes, production of cucumbers, melons, strawberries, bananas, paprika and other fruit vegetables is under consideration.

Utilizing the characteristics of IMEC that high-quality crops can be produced even in barren areas that are not suitable for agriculture, production of high-quality tomatoes has started in large-scale disaster areas in Japan and in the deserts of Shanghai and Dubai where soil pollution is threatened overseas. It was. The production of Aimec tomato is also planned to be introduced to Saudi Arabia, Russia and the United States.
In addition, we are developing a new plant factory technology for the cultivation of leaf vegetables such as lettuce using IMEC film.

The IMEC patents have been applied in over 134 countries,It has already been registered over 110 darker. 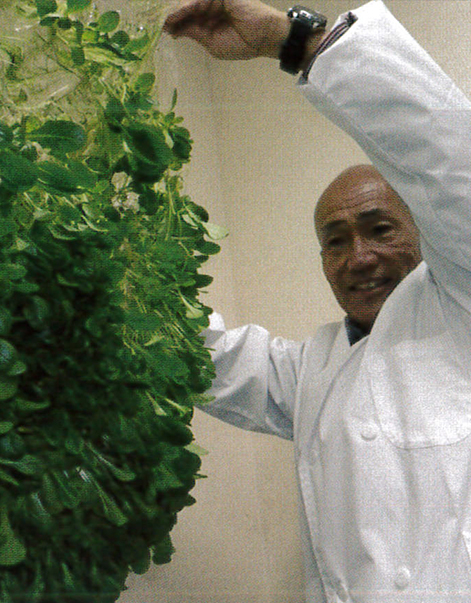 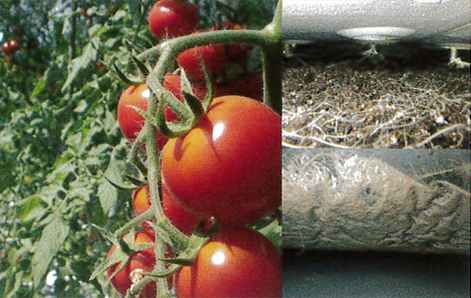 In recent years, "visualization of cultivation environment" has become popular for the purpose of improving yield and quality.

This is one method that aims to improve the management and make it into a manual by monitoring the management method of cultivation, which has been conducted based on intuition and experience, as a numerical value.

IMEC also "visualizes" the state of roots that could not be seen with conventional agricultural technology.

The amount of roots, the color of roots, and the amount of absorbed water and nutrients are useful for understanding and diagnosing the condition of tomatoes. 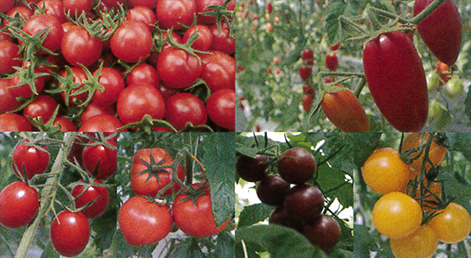 The properties of IMEC film give rise to a huge amount of capillary roots that can efficiently ingest nutrients. As a result, tomatoes grown in IMEC have a good taste and aroma, and their sugar content and nutritional value (lycopene, amino acids, GABA, etc.) are very high, and they are highly evaluated.

According to the recent consumer trend survey, vegetables with high safety, security, and high nutritional value tend to be "quantity to quality" selected by consumers even if the price is a little higher, which is also in line with the IMEC concept. You can say that.

In fact, the tomatoes produced by Imec by each farmer have received various awards and have been highly evaluated.

In addition, we have received many voices from mothers saying, "Even children who don't like tomatoes will eat it.

Anyone can do to agriculture 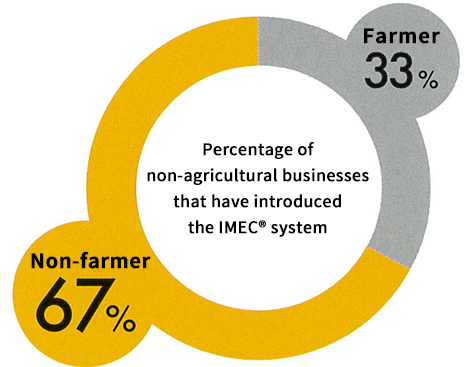 Soil plays a leading role in agriculture, but it is very difficult to control soil properties accurately. The soil properties change depending on the location and season.

It is said that it will take 10 years to acquire soil and watering that can stably produce high-quality tomatoes (called fruit tomatoes), but IMEC is a uniform industrial product instead of soil. By using the film, even inexperienced farmers can learn highly reproducible agriculture in a short period of time.

In fact, more than 60% of non-agricultural businesses have introduced the IMEC system so far. A variety of people from different industries have adopted the IMEC system to make a new entry into agriculture, and have produced and sold high-quality tomatoes from the first year.

At present, there are more than 120 farms that have introduced IMEC, and the technologies that enable us to engage in wisdom with peace of mind have been accumulated based on the knowledge accumulated daily. 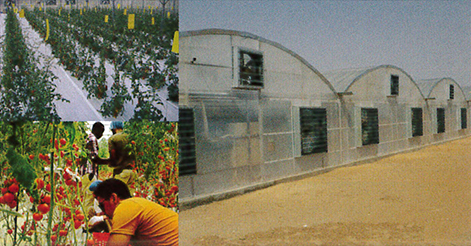 At Imec, you can grow the desert, polluted soil, salt-damaged soil and even the highest quality vegetables in the building.

It is completely isolated from the ground by the waterproof sheet, so it is not affected by the soil. At the same time, the supplied water and fertilizer do not leak to the outside, so the amount of water and fertilizer used is significantly less than in conventional farming methods.

Currently, the introduction of AIMEC farms is progressing in Rikuzentakata City, which has been a disaster area in Japan, and in the desert areas of the UAE (United Arab Emirates) and areas where there is a risk of pollution in China.

I hope Imek can help you create jobs, restore economies and regain hope in areas where agriculture is unsuitable.

Outline of the Aimec cultivation system 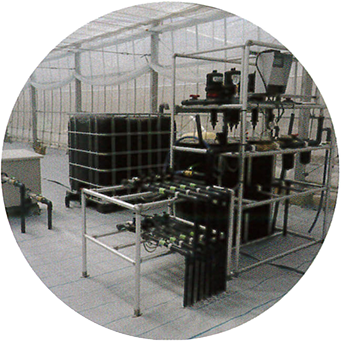 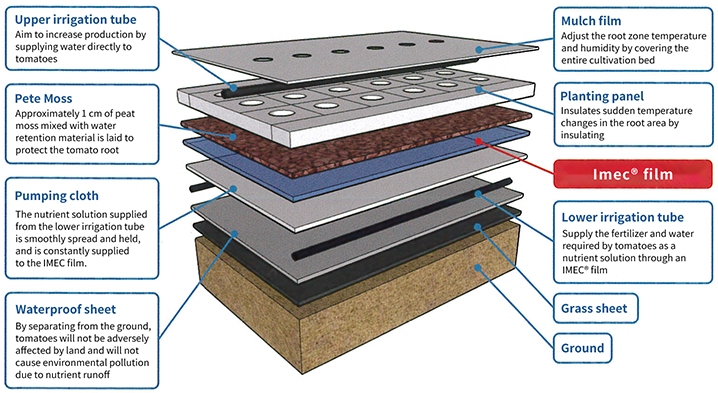 How to install an IMEC cultivation bed 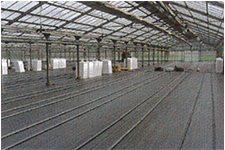 Weeding sheets are laid on the soil-filled soil cultivation house, and the frame of the cultivation bed is installed on it. 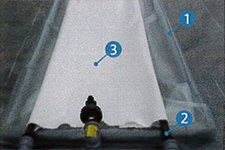 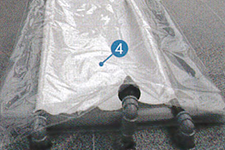 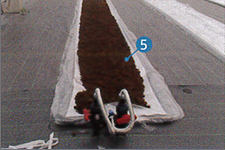 Spread Pete Moss ⑤ with a heat of about 1 cm 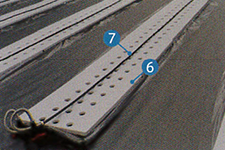 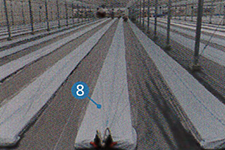 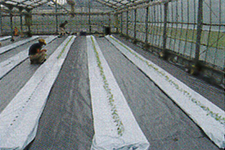 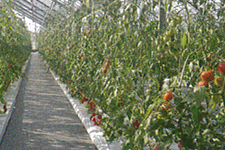 Harvesting will start in about 2-3 months!